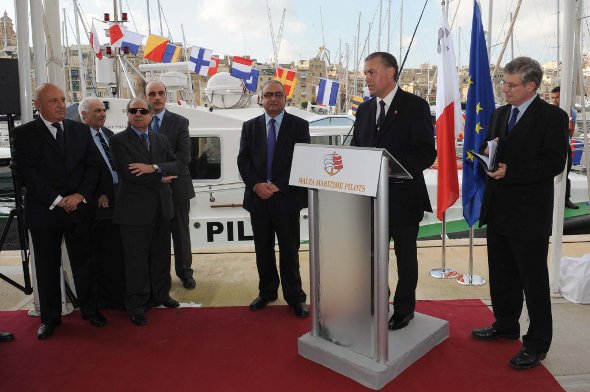 Chief Pilot Capt. Jesmond Mifsud said that due to the ever increasing demands and competitiveness of the cruise liner industry, the pilots took the initiative to invest in this pilot boat immediately and not in four years time as was originally planned. This means that there is now one new pilot boat in each port.

Foxtrot, an Interceptor 48 Pilot pilot boat, was manufactured by the Irish Company Safehaven Marine, and is the largest and most powerful pilot boat to grace our ports. Owing to its capability to operate in rough weather, as well as to its speed and size, the Malta Maritime Pilots Co-operative is looking into the possibility of providing this pilot boat as a marine ambulance for local maritime emergencies.

The co-operative recently employed a Master Mariner and three assisting persons to run the pilots training centre. Next week, the Malta Maritime Pilots Co-operative, in conjunction with Transport Malta, Tug Malta and CMA we will be carrying out a simulator study on a 400 meter containership which is expected to visit Malta Freeport in the near future. Training is of paramount importance for the cooperative – the safety in our ports can only be achieved by training and investing in adequate equipment and qualifications.

Capt. Mifsud emphasised that “since the pilotage reform in 2003 the pilots have come a long way with the co-operation of the members of the port industry, Transport Malta, terminal operators, agents and Tug Malta.”

“The Malta Maritime Pilots Co-operative is a living testimony of the effectiveness of the cooperative business model. It is a model that meets the aspirations of members and rewards the community. I am convinced that we will continue to work together to continue improving the services that we offer to our customers and to the country.”